We woke to a minus 4 degrees frost in Ohakune. Luckily our unit was warm and cosy. Kevin was the only one who braved the cold for a morning walk to take photos. After breakfast we packed once again, checked out and drove out of Ohakune heading for Waiouru. We had hardly gone a kilometre when the call to stop came. It was a line of deer being fed hay. 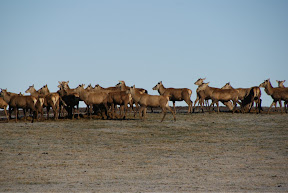 I also took photos of the frozen grasses on the roadside. 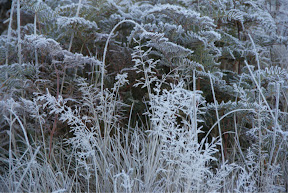 The frost over night was very strong and there were lots of places on the road where the road was covered with ice. One car was driving too fast and ended up in the forest after going off the road. 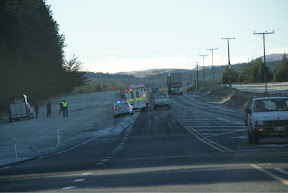 This was a timely reminder for our driver to reduce his speed. 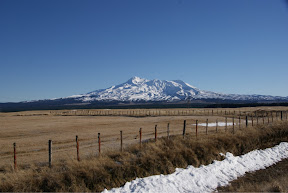 We took more photos of the mountains as we drove along the desert road. The NZ Army has a huge base in this area. 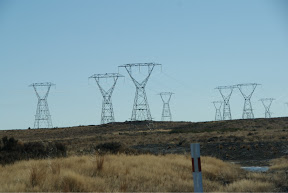 The power lines in the area look like Aliens in the landscape. All along the road were signs of the last snow fall and the water was frozen over. 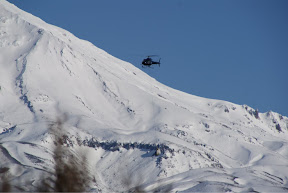 We saw this helicopter carrying something in a bag land just near the road. Some vehicles were waiting. 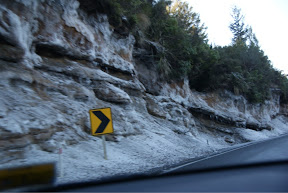 After driving around the lake we stopped at Turangi for morning tea. The first two places we went into did not respond to our entry so we walked out. We finished up at Thyme for food which was really nice. 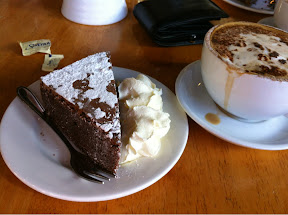 I had chocolate brownie with coffee.
Turangi is famous for trout fishing and we stopped at the bridge to see if they were catching anything. Chris saw a huge trout tyat was caught by one of the fishermen. 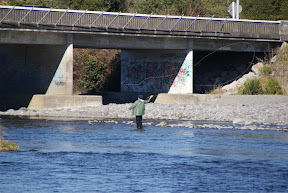 We then drove on to Taupo where we dropped in on MIL for some lunch. Back on the road again through Tokoroa, Putaruru, Tirau, Matamata, Te Aroha, Paeroa and Kopu to Thames. The clouds were beginning to appear in the sky and it was a little warmer than it was this morning. We found a motel (Shortland Motel) for the night, settled in and then went out to find some tea. Pork roast was on the menu.
We only have one full day left for Tiki touring. I just hope the rain is not too bad. We have been spoiled with fine weather.